The 6 rules of smart simplicity

The 6 rules of smart simplicity

Being fully independent in a cooperative environment to help business productivity. No, this is not an advert or even a political slogan; according to BCG, it is the essence of digital transformation

The organisational structures of modern companies are mainly inspired by ‘Taylorism’ (named after the American engineer Frederick Taylor, who begun to research methods to improve production efficiency in factories). Taylor’s approach originated from the idea that workers have little ability to think and work independently without supervision. The introduction of technology within organisations that follow this organisational model, according to the analysts of The Boston Consulting Group (BCG), tends to constrain rather than expand employees’ abilities, at the expense of business productivity.

From this perspective, the BCG analysts have developed an approach based on 6 simple rules called ‘smart simplicity’, which ‘unlocks’ business productivity by creating a working environment in which employees are able to put their creativity into practice either independently or by working together.

According to the analysts, “the true essence of a digital transformation is leveraging digital tools (figure 1) to push smart simplicity into organisations and unlock latent productivity”. 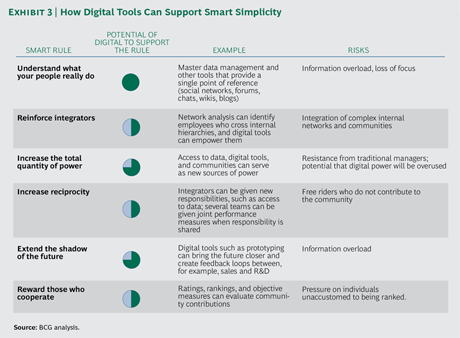 People must not only understand their work but also each other’s work, their goals and challenges, the resources they can draw on and the constraints they are subjected to. This kind of information, as the analysts point out, cannot be found in formal job descriptions, but you can only learn it by observing and interacting.

Conflicts between front and back offices and between the parent company and country operations are common in all companies and the so-called ‘coordinating units’ on a regional level (Emea, Apj, etc.) are not always effective. The answer provided by the BCG is to empower individuals or groups (called ‘integrators’) who work across organisational boundaries, helping other business teams achieve a higher level of cooperation between them.

Usually, people with the least ‘formal power’, namely who do not have a role of accountability, tend to operate ‘at the margins’ of the organisation, withdrawing in their operational and mental silos. Ideally, as the BCG recommends, we should give these people ‘more power’, stimulating their willingness to take more initiative and encouraging a sense of responsibility (for example, it is sometimes sufficient to train people in project management), but being careful not to create ‘power islands’, which can be even more harmful than operational silos.

People’s efforts should always be reciprocal: a good way to spur cooperation is to expand the responsibilities of ‘integrators’ by enhancing the goals to be achieved individually or in groups (this will allow them to develop greater balancing and problem solving skills). The analysts, however, warn to be careful, since such greater responsibilities do not always require more resources (sometimes, in order to stimulate creativity, it is better to cut down the resources available).

The longer it takes for the consequences of a decision to take effect, the more difficult it is to hold a decision maker accountable. This is the so-called ‘shadow of the future’, i.e. the veil that covers people, responsibilities and decisions in very complex processes lasting months or years. Indeed, it may happen that, at the time of the launch of a product or service, the work team no longer takes into account those who took part in its previous phases (perhaps simply because they changed job). According to the BCG analysts, the effect of this ‘shadow’ is often underestimated, yet it could cause discontent and dissatisfaction that lead people to not feel involved in their company, thus becoming less productive.

In some businesses, such as R&D, it becomes difficult to set the reward mechanisms on the basis of the effects produced by activities, since there is such a long interval between the cause and effect (for instance, think of how many years of research it takes for a drug to be launched on the market, thus allowing the manufacturer to profit from it). When it is impossible to define ‘performance rewards’ in a conventional way, it would be a good idea to motivate the productivity of employees with a ‘cooperation award’, thus encouraging collaborative working.