With App Stores being invaded by the endless wave of Mobile Apps – especially for games – there is an enormous range of free development tools encouraging ‘young developers’ to create their own ‘little App’ and sell it online for a few cents.

Nothing wrong of course but, my dear ‘little nerds’, gaming is serious stuff!

Over the last decade, great strides forward have been made in software development and today, with the possibility of ‘assembling’ code packages made available by open source communities, even the least experienced can ‘cut their teeth’ without extensive knowledge of programming languages.

However, all this is not true for those who develop games – at least those who want to actually ‘make money out of it’. Just because it has become easier to ‘assemble’ the code and forge it into an application service does not mean that programming and developing a software solution is easy – even less so with games requiring hard work and dedication.

Developing a game independently is almost an impossible mission today – or rather it is doable if you do not have too many expectations of success and you want to see your mobile or tablet game published on an AppStore more than anything else. If you aim for something more complex, which does not just mean consoles and web platforms but also ‘free to play’ business models, typical of mobile gaming, well … then even goodwill is not enough.

However, if Candy Crush comes to mind as an example of a ‘little smartphone App,’ you probably do not have a very clear idea of the field (primarily because the version being used on mobile devices today is a variation of the game designed years ago for web browsers): King Digital Entertainment, the developer of the game, which was sold to American Activision for US$ 6 billion in November 2015, was founded in 2012 but its founder, Riccardo Zacconi, has been active in the world of gaming for over 15 years and boasts considerable experience. Not only that, the success of this game is certainly due to game designer Tommy Palm’s brilliant mind, but without the in-house team of experts (graphic designers, narrative designers, developers, music experts for sounds, etc.) Candy Crush would never have seen the light!

Good ideas and plenty of will help but are not enough!

Recently I was in Dublin at the Hadoop Summit 2016 where some developers of the community made a few remarks I would like to share with you.

Ignoring the fact that professional middleware solutions and graphics engines have a cost that is not really accessible to everyone (although, as mentioned, over the last decade, the accessibility of free tools has made things a little easier for those who do not have too many expectations), to develop a successful game, you need a lot of skills (including maths, literature and fiction, drawing, music, and computer science), but the essential ingredient is attention to detail.

A game should not only be performing (it seems obvious to me that it needs to work!) but it must also capture and engage the user.

The factors affecting a gamer’s involvement are countless, including more technological and infrastructural aspects – the environments the game is released on, the graphics cards to support the application, the performance required for the CPU and memory, the necessary connection capacity, the implications on mobile device batteries, etc.). Let us not forget that game developers take the use of infrastructure resources to extremes, often ‘pushing’ top IT vendors to release more and more efficient solutions which then also apply to the Enterprise world. Bringing data analysis into the memory and bringing the graphics components closer to the CPU or even integrating them into it, SSD storage and All-Flash advancement, the development of GPU and neuromorphic chips with higher performance are just a few examples of infrastructure development to support the demand for computational capacity, which in games play a major role.

And should we only want to look at the ‘noblest’ side – application technology – engaging the user is the most critical element … it must be continuous, especially in games like Candy Crush where selling the game itself does not really generate income for the company, but rather the proposal of ‘ancillary services’ (additional lives, ingots and coins to purchase ‘special candies,’ etc.): the level of difficulty should always strive for growth, scenarios must change but remain consistent with the ‘background story’, the GUI must be ‘immersive’ – even the importance of characters’ names and voices should not be underestimated. ‘Engaging’ the user does not simply mean ‘hooking’ them but involving and keeping them so through a continuously improved user experience.

Therefore, dear ‘little nerds’, focusing on the final user, the one you will ask to love your game, is an essential requirement for your work. Do not forget that competition is fierce today – if your game has just one ‘minor flaw’ … for us who are on this side of the barricade, change is easy! 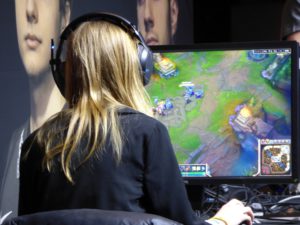